Mobile app development is a complicated process. It requires a lot of time and investments from the developer and the client before it is ready to launch. With the advancements in technologies, innovations in the development framework make it possible to speed up the development time. Less time spent developing means faster deployment of the app in the market.

React Native has gained immense popularity in recent years. Many of the top apps, like Instagram, Snapchat, and Netflix, have used the framework for their apps.

So, what is React Native really? Let’s explore and see is it worth investing!

What is React Native?

Jordan Walke, a software engineer at Facebook, is the mastermind behind the innovation, React Native. The idea for the framework was to make development simpler and improve user experience. Using JavaScript as the core programming language, React Native decreases development time and improves the performance of cross-platform apps.

React Native is a ‘native’ version of the ‘React’ web library built to improve cross-platform app development. The open-source application development framework develops native-like hybrid apps using the ReactJS library. The library can be shared between multiple platforms, making it easy to create apps for both iOS and Android with one codebase.

Using the React JavaScript UI, developers code the user interface for both platforms with the same UI building blocks as used by iOS and Android native apps. They are later bridged with JavaScript and React that allows the apps to work efficiently on both platforms.

Furthermore, React Native apps function like native apps. There is no difference in the performance of a React Native mobile app and a Native application built on Java, Objective-C, or Swift. Additionally, the attribute makes it possible for React Native apps to provide excellent user experience and a smooth user interface.

Why You Should Use React Native for Mobile App Development 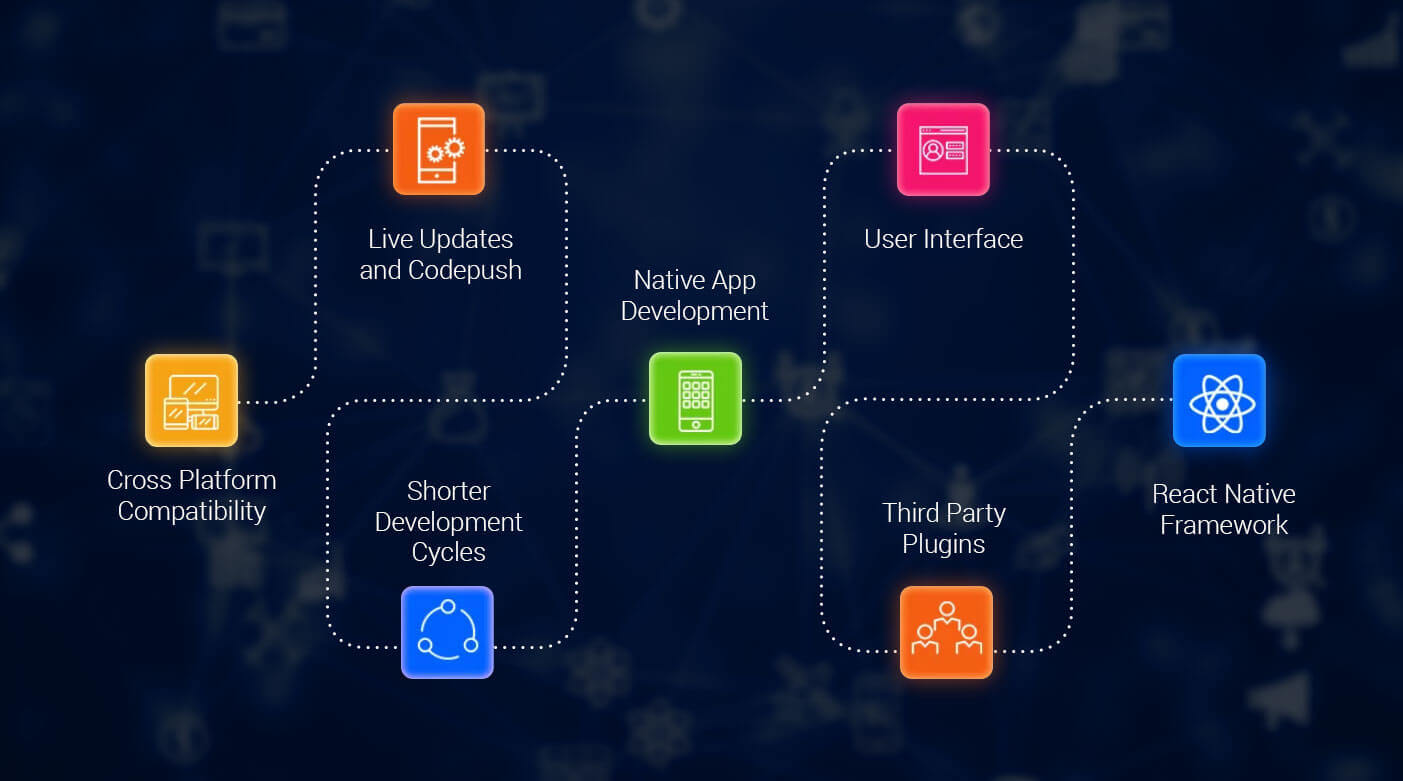 React Native framework is the future for cross-platform app development, but the question is, should you invest in it? The answer depends on the type of app you want to create.

React Native is designed to integrate the high-speed responsiveness and agility of web apps to hybrid app development. With efficient processing and smooth user experience, it creates cross-platform apps that provide a native app experience.

Here are some pros to decide why you should consider React Native:

The use of one codebase is one of the significant perks of the React Native framework. The cross-platform app displays the same level of performance as a Native app.

React Native utilizes ReactJS with native UI library and native APIs to write the base code of one application for both platforms. It eliminates the need to write separate code for the same app on different platforms. The feature simplifies development processes for the developer, saving time and money. 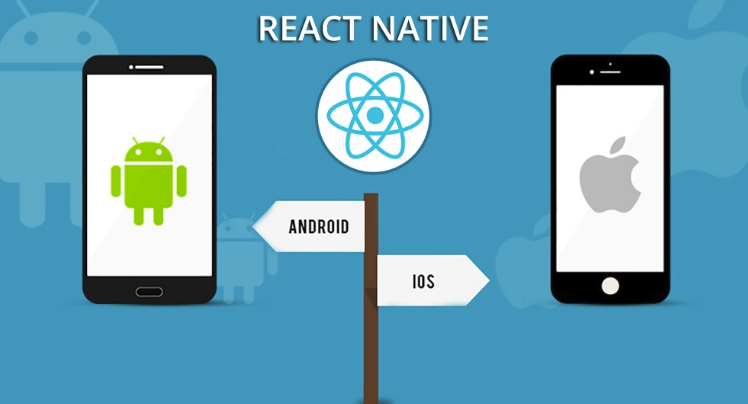 Developing a mobile app is a strategic move for businesses to survive in the present tech-savvy world. As entrepreneurs, starting a new business venture, however, money is tight. You can’t go all out and invest in an idea without considering the pros and cons.

React mobile development offers a solution for it. With one codebase for both platforms, developing React mobile apps take less time than Native applications with separate codes for Android and iOS.

The less development time makes it possible to keep the overall cost low.

Additionally, faster development means you can launch the app and join the competition earlier than planned. Plus, with its one codebase technique, you can save on the cost of hiring separate experts for both iOS and Android development.

Get Native-Like Performance at Hybrid Speed

Additionally, React Native app development employs a graphics processing unit to mount the user interface of the apps conveniently. Instead of the central processing units that are native processors. The difference allows for faster creation and execution, and improved agility of the application.

React Native uses the React JavaScript UI to design the apps’ user interface. The result is a more responsive and faster UI with decreased load time and better user experience.

The framework is ideal for developing simple apps without an intricate design. Simplicity is the prime attribute that makes the interface smooth and responsive.

The benefit of using a community-driven technology is that all the data and documentation related to the innovation are available for everyone. React Native is an example of such technology.

Another merit of having community support is that developers can share their expertise and find relevant information online. You can share your experiences, collaborate on projects, and get feedback from your peers.

The cross-platform app development concept features a standard codebase that you can reuse for both iOS apps and Android apps. React Native works on the same principle, but React apps are equal to Native applications concerning performance.

React Native follows the notion ‘write once and launch everywhere.’ Ninety percent of the code is similar for both platforms, which adds to the convenience of the developers. They don’t need to design separate apps for each platform. Additionally, if a company has an existing web app, most of its code can be used to develop a mobile app.

Furthermore, with React Native, you can reuse the pre-built components available in the open-source library. Reusing the code that someone else wrote for the feature you want in your app also decreases development time.

React Native is still in its infancy stage. So, it’s not surprising if some components are missing in the core framework.

As a countermeasure, the framework offers third-party plugin support. Two types of plugins applicable are Native Modules and JavaScript Modules. If you want to add Google Maps or Google Calendars, for example, to your basic app, then via React Native, you can link to any plugin with a Native or third-party module.

The speed with which the framework took over the market and its straightforward approach to solving development problems are proof of the future of React Native for hybrid apps.

A single code is enough to develop apps for Android and iOS, which is convenient for removing bugs and fixing other errors. React Native is only applicable for simple app designs but the convenience and speed of development outshine the cons of the framework.

React Native uses a simplified binding strategy for its codebase. So, to change one object, you need to modify its state before applying updates. It results in a more stable and reliable app than other cross-platform app development methods.

Additionally, the use of native APIs for rendering code instead of WebView results in better-performing apps.

The use of Native modules is a significant advantage of the React Native framework, making it worth reiterating.

With React Native, you can limit the number of people on the development team. The use of Native API in its single codebase means that there is no need for platform-specific experts for both iOS and Android app development. You have the liberty to use one code on all platforms, which is convenient to create and maintain.

React Native offers developers a learning experience. They can make and apply any alteration to the program while it is running without restarting.

Furthermore, developers can use flexbox to design app layouts for Android, iOS, and the web. They can integrate Chrome Developer tools to React Native and gain access to the debugger and profiling tools.

If a developer is shifting an existing application onto the React Native framework, then they can incorporate the components into the current code regardless of its type.

The use of JavaScript as its primary language enables developers to release updates without going through the app stores. React Native simplifies cross-platform app development, allowing developers to use tools to launch updates at a moment’s notice.

React Native Mobile App Development has some Loop Holes too

Not everything is perfect about React Native for cross-platform app development. Despite its immense potential, here are some things to consider when deciding the framework for your next mobile app:

The future is subjective to Facebook’s commitment to its development.

The framework is still young, so not many components are available. Its immaturity, compared to Android and iOS platforms, impacts the performance of programs.

React Native is not the right choice for developing complex apps with animations, screen transitions, and other complexity.

Lack of support for jQuery and CSS; jQuery relies on HTML DOM, and React Native is not compatible with it.

Should You Use React Native?

Taking into account the perks and drawbacks, it is apparent that React Native has a future in cross-platform app development. The framework is an excellent choice to opt if you want:

Your app to be delivered faster

To spend less time on the testing phase

Convenient bug fixing on all platforms

In a nutshell, React Native will be a cost-effective and future-proof investment for startups and enterprises.

So, are you ready with your app idea? Share it with our app experts and get more insights into the best direction for your app.