Ruby on Rails (RoR) is a flexible and agile framework that has turned 15 years this year. While some consider that the framework cannot compete with newly emerged frameworks, RoR keeps releasing new and updated features and is nowhere near quitting the programming world. What makes it stand apart?

Let’s discover more about the RoR framework, list Ruby on Rails benefits for your project, and determine the main reasons for trying it out and implementing in 2021.

The Definition of Ruby and ROR

Ruby on Rails is written in a dynamic and well-known scripting language, Ruby, introduced in 1995. Till now the language ranks among the most efficient ones on the market. Ruby is widely utilized to build versatile and high-end web applications.

Ruby on Rails appeared in 2005 during the process of Basecamp creation. The framework originated from the application's underpinnings and building blocks. It was then improved to be extensible, open-source, and multi-purpose. Having made a breakthrough in the web development industry, Ruby on Rails keeps its position as an efficient server-side framework.

Ruby on Rails has a lot of great advantages when it comes to application development, like speed, simplicity, dozens of integrations, and more. Let’s have a closer look at RoR’s features and pros.

The Pros of ROR

Another principle allows web developers to reduce information repetition. If there is a task that calls for iteration, there is no need to produce a separate code. Developers can reuse existing codes, make modifications, and eliminate errors in the full cycle of application development.

This principle helps developers to significantly save time as they don’t need to configure from the outset. The framework predicts what developers will do and how they will achieve it, eliminating the need to memorize all the configuration details. As a result, they get a chance to accelerate the development process, reduce the amount of required code, and optimize the full cycle of building an application.

Apart from the already mentioned principles, the RoR framework is well-known and valued for many other benefits:

Let’s compare. What is easier to understand?

The first one is written in Ruby, while the second — in Java. Ruby on Rails has an easy and legible syntax that lets developers create more with less code which looks logical and native.

Besides, high readability makes the language almost self-describing. There is no need to add comments for other team members as they can understand the concept of the project from the existing code, immediately grasp it and further proceed with its development.

Another great advantage of the RoR framework is its security. It implements all the required safety measures to eliminate any SQL-injections or attacks like XSS.

There is also a great number of gems (akami, brakeman) that are related to security and help to avoid potential risks and protect projects from data leakage and different types of cyberattacks.

The framework makes it possible to reduce the process of building apps almost in half with the help of the below features:

Ready to use plugins

All of the above enables faster mobile app development, better collaboration, and easier maintenance. Developers don’t need to build new infrastructure as RoR offers a powerful ready-made one.

There is also no need to configure components from scratch as RoR has a list of libraries with all the required features. For example, you can easily set up sending Ruby Gmail and other options. The only thing left to do is integrate them and test.

The framework is stable and predictable. Developers can easily modify the code or add new and updated features. Thus, application maintenance is simple and flexible. It is particularly handy for long-term projects where developers need to update applications regularly, refactor their codes, add new functionalities, and remove outdated ones.

Ruby on Rails is valued for its cost-efficiency. It is free and able to work with different databases and servers, on a number of devices at various locations. For those on a budget, looking to avoid additional costs, RoR serves as a perfect solution.

Besides, many of the offered libraries can be booted free of charge. The framework easily accommodates changes, enabling a faster process of web development, and asking for less money on implementing further updates. 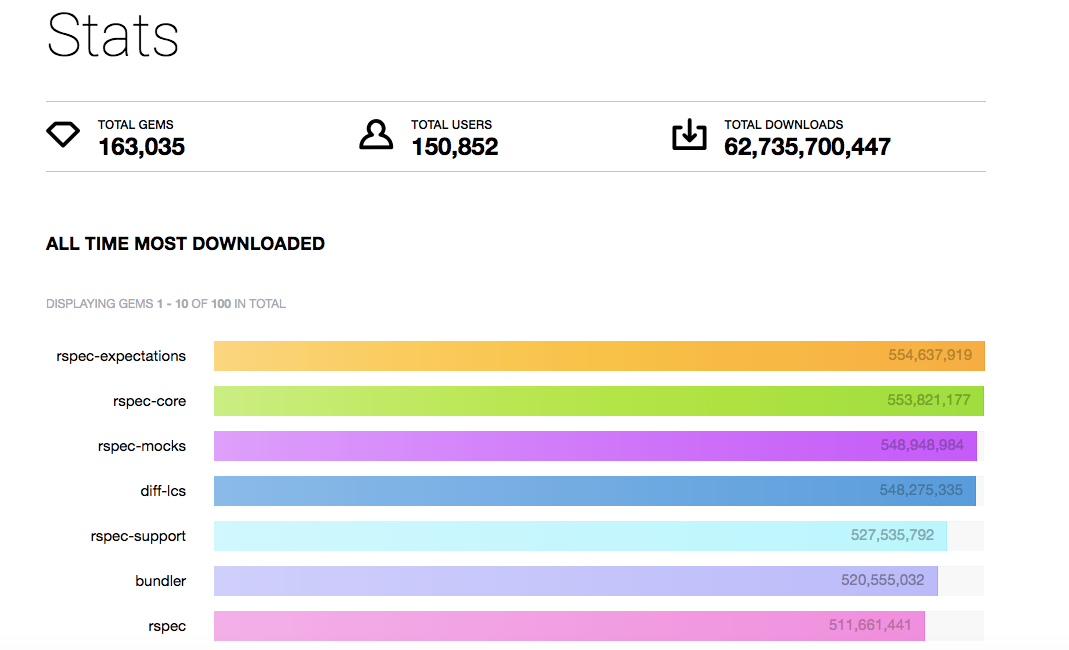 The total Ruby on Rails gems number is already over 163,000.
Source: Rubygems

The RoR framework is also valued for a wide variety of web app development tools — Ruby Gems. They represent different libraries that let developers add various features to web applications. Ruby Gems serve as ready-made snippets for certain tasks, meaning for any function that needs to be implemented, there is a specific gem available.

The framework’s maturity is associated with fewer risks, enabling the development of top-notch products. Ruby developers can utilize available libraries, save time on producing the code, and concentrate on more important tasks to build a decent web application with great functionality.

The full-stack RoR framework covers both designs: front-end and back-end. Therefore, it can be utilized for different projects:

RoR is great for building applications with general purposes or websites that call for frequent changes and upgrades. Ruby on Rails is also leveraged to build sprawling apps with rich functionality like Shopify, or GitHub.

Ruby on Rails framework, despite being on the app development market for quite some time, is fast and efficient. According to Slant, RoR keeps its position in the top-5 frameworks utilized for back-end development. There are over 520,000 websites built with the help of RoR and their number keeps increasing. 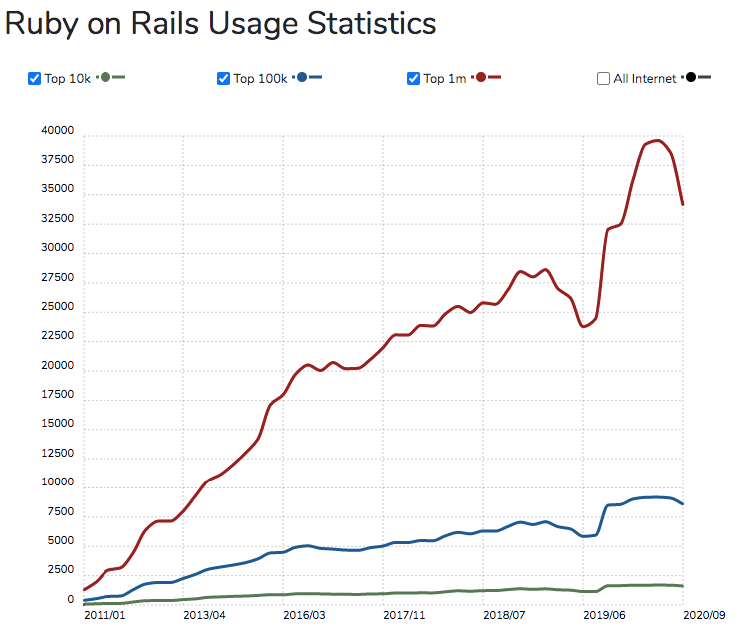 The last version of RoR was introduced in October 2020. However, the RoR team keeps improving and has recently announced a candidate release for RoR 6.1. New features are all about adding extra functionality to the web applications:

Connection Switching. While in the previous version developers switched connections in all databases at the same time, the new version makes it possible to switch them in one database only.

New Loading Associations. With the eagerly loaded associations, developers now get a chance to stop N+1’s in advance.

Delegated Types. serves as an alternative for single-table inheritance and helps to introduce class hierarchies. Every subclass has its table for any additional attributes.

Error Objects. Having an object interface, apps can now handle errors and interact with them. Users also get access to error details and the ability for precise testing.

The RoR team is constantly improving the framework, adding updated features, and fixing existing bugs in order to make the process of building applications smooth and efficient.

Being versatile, RoR gives the ability to build projects of different types and offers a wide variety of great gems to simplify many processes. Besides, with rapidly growing digital transformation , the opportunity to introduce a top-notch application within the shortest period will further increase the demand for Ruby on Rails. 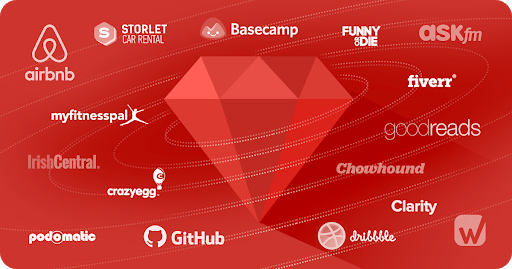 Web Applications that have been built using Ruby on Rails.
Source: Railsware

The framework has been already used by Airbnb, Dribble, Hulu, Apple, Groupon, and many other services and brands. Websites that work with large volumes of content, e-commerce platforms and those dealing with social media massively favor RoR as it provides many supporting tools, relevant features, and fast and simple maintenance.

Ruby on Rails is efficient, versatile, and works perfectly for web development. It quickly absorbs changes and enables comfortable web design, cost-effective development, and further maintenance. The framework has excellent testing and automation which makes it possible to introduce a high-quality end product. Besides, RoR has good security strength.

An open-source RoR framework serves as an ultimate solution for those on a budget. It assists with building different web applications, picking the relevant tool for a new startup, creating a more complex site with a database, or planning to introduce an online shop, a new social network, or any other project where users will have to sign up.