How many times have you touched your phone today? Because we are worried you may have a smartphone addiction..

Go ahead, take a minute and try to come up with a number. From the time you turned off the alarm clock this morning (because let’s face it, you probably used your phone to set the alarm) to the third time you checked your ex’s Instagram account (you’re going to drive yourself crazy with that) to right now (when you’re probably reading this on your phone), how many times today have you touched your phone? 15? 30? 100?

You read that right, whether it’s typing, swiping, clicking or tapping, the average smartphone user will touch their phone over two thousand times in any given day. Not that is it medically defined, but we would consider this an addiction. Most of the time, these thousands of touches are brief because we’re not using the phone for two hours each time we pick it up, we’re firing off a quick text or setting a reminder to buy more eggs.

This smartphone addiction is causing an uptick in physical and mental health issues related to this compulsive use of our devices. It’s easy to think the answer lies in ditching our phones but as more and more companies provide their services via apps, our phones are important tools. Plus, let’s face, it, those suckers are expensive and we’re not about to toss the phone we stood in line all morning to get.

Are these health consequences really that big of a deal (spoiler alert: yes)? And, if so, how do we counter its deleterious effects? The answer, as it so often seems to, may lie in turning back to the basics. How basic? Like the Little Mermaid, we need to find our voice again. 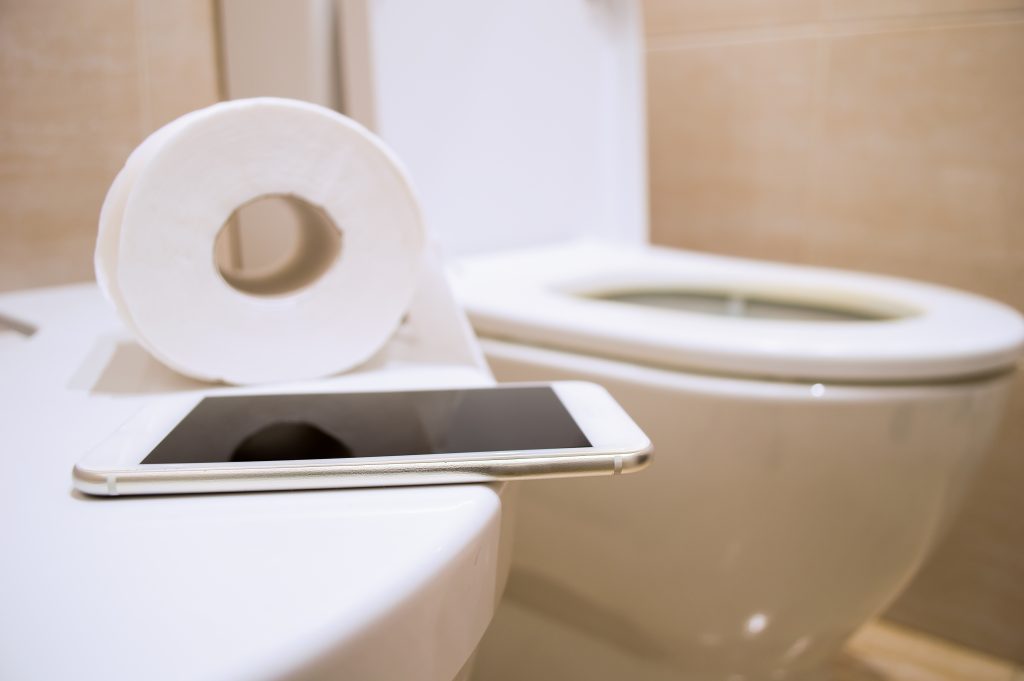 Never have I ever used my smartphone while sitting on the toilet. Oh boy… pass the tequila, it’s time to take a drink.

Show us someone who has never used their phone in the bathroom and we’ll show you a liar. This gets extra dodgy when you realize that 1 in 5 of us won’t wash our hands after our visit to the toilet and of those of us who are washing our hands? Only 5% of us are doing it properly.

Then we take our phones back with us and set them on the dining table, occasionally swiping at the screen while we eat. We take our dog for a walk, pick up after them and then tap at our phones some more while Fido runs around the park. Then we shake hands with other people who didn’t wash up after going to the bathroom or cleaning the cat’s litter box and their germs come to us and ours to them and then we all touch our phones some more. It’s a big share-fest of fecal matter and E.coli, among other things.

The good news is that it’s not hard to sanitize your phone (and it’s definitely not hard to make a habit of washing your hands regularly!). A simple dry microfiber cloth was found to remove 80% of bacteria.

While our unfortunate hygiene habits do have consequences for our physical well-being, bacteria feels like an abstract risk to most of us.

What is not abstract are the very real physical consequences our compulsive smartphone checking. As we get older, we all start to complain about aches and pains, especially in our neck and shoulders. but what we’re seeing is that these complaints are appearing in much younger people than we would have expected. The reason, obviously, is down to our phones.

Colloquially known as ‘text neck’ the pain and most of us feel in our neck (and shoulders and upper back) is a repetitive strain injury that is on the rise as more and more of us live our lives hunched over our phones. We are tilting our heads forward and down which goes against the natural curvature of our neck. Although our heads only weigh about 10-12lbs, for each inch that you bend your head forward you double the load on your neck muscles. That means that by the time you’re actually looking down at your phone, you’ve got about 60lbs of added pressure. Ouch.

To top it off, when we’re slouched forward the way that we do when we’re engrossed in our screens, you restrict your lung’s ability to draw air. Less oxygen equals your heart having to work even harder.

Carpal Tunnel Syndrome is another unforeseen consequence of our smartphone-driven lives. We use our hands to check our phone over two-thousand times a day and it takes a toll. Right alongside an increase in Carpal Tunnel was an increase in thumb pain, palm pain and general waking of strength and function in the hands. Yikes!

Do you remember waking up early to watch cartoons? And how your parents were constantly telling you not to sit so close to the TV but you would ignore them until you started to get a headache and your vision got a little weird? That’s called eye-strainand, you guessed it, it’s another danger posed by smartphone use. Generally speaking, the only treatment for eye-strain is to stop doing the thing that strains your eyes or to minimize the risk of developing it at all by following the 20-20-20 Rule. The 20-20-20 Rule is simple – for every 20 minutes of screen time, look up for 20-seconds while looking at something at least 20 feet away from you.

Mental health is a complicated subject and we are still learning why two people can experience the same things but only one of them goes on to develop depression or PTSD. So when we talk about the link between smartphones and mental health issues, it’s important to be responsible and acknowledge that since smartphones are only about a decade old, this connection is still being explored.

However, so far, the evidence points to a link between smartphone use and depression, especially among teens. It was initially thought that perhaps the increased rates of depression were due to teenagers spending too much time on social media, rather than on the phones themselves. While social media has been shown to have its own pitfalls, it turns out that it’s not the content that’s the issue. Whether they’re viewing pictures of a party they weren’t invited to or a video of kittens playing with a monkey, the content made no difference but the time spent on the phone did.

It seems probable that people who spend more time on their phones are more likely to develop depression for one simple reason: a lack of human contact and connection. It’s one thing to send a text message to your best friend but another to get together and see the way their face lights up when you talk about your mutual interests.

Another aspect of our obsessions with our phones is Phantom Vibration Syndrome where we think our phone is vibrating or ringing when it’s not. While this sounds relatively harmless it translates into yet more touching of our phones when we don’t need to. And, you know, since you already dug it out of your bag, you might as well check Twitter. And Instagram. And… before you know it an hour has gone by.

Of course, there is also the oft-joked about ‘smartphone addiction’. The thing is, this is a real issue, not just something your grandmother teases you about. We are so addicted to our phones that 1 in 10 of us check it during sex, 12% of us take our phones into the shower (what magic waterproof case do you guys have?) and over 50% of smartphone owners are still using them while they’re driving (which is 6x more dangerous than driving drunk so really need to cut it out). One study found 28% of smartphone users feel stressed when they are without their phones while 51% said it was serious enough that they felt “extreme tech anxiety”.

In fact, we’re so used to reaching for our phone for everything, we once saw someone go through the effort of digging their phone out of their bag to check the time. The catch? They had a wristwatch on! 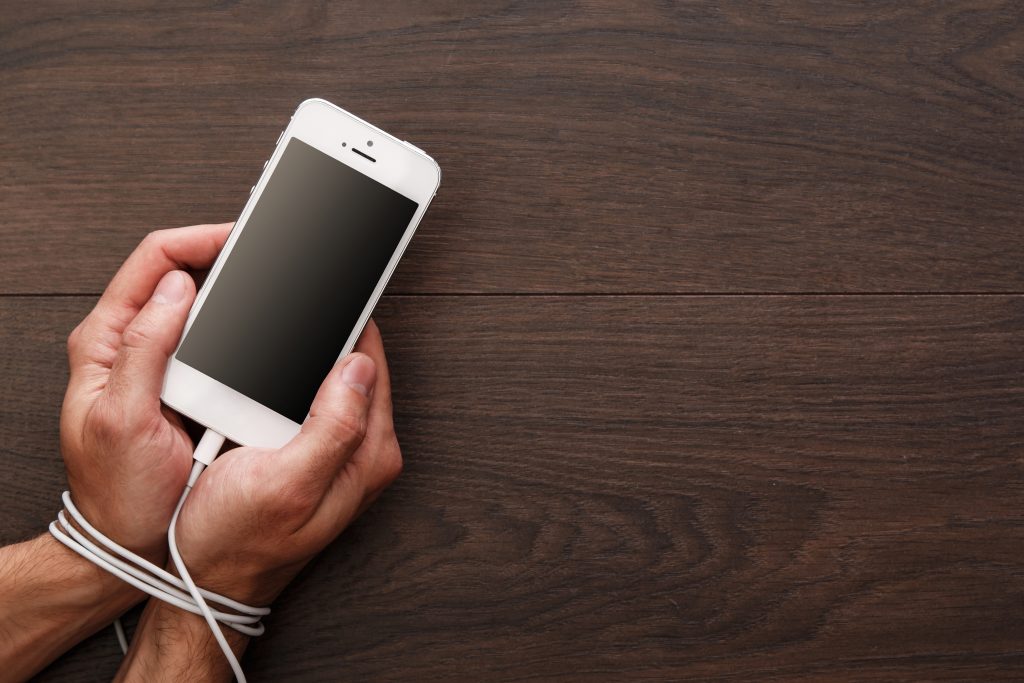 How To Keep The Smartphone and Ditch the Addiction

It might feel like the only solution to our E.coli-riddled, depression-inducing phones is to chuck ‘em into the ocean (that’s polluting so don’t do that) but that’s no more practical that getting rid of all cars because they contribute to pollution. Smartphones are here now and entire companies are being built all the time whose sole purpose is to develop things based around our phones. The trick is to make our phones better and healthier.

This is where the Little Mermaid comes back into the equation. Like Ariel, we need to find our voices and for smartphones that means looking Natural Language Processing (NLP). When you ask Siri to set a reminder to call your uncle, you’re using NLP. It’s possible to go in and set the reminder yourself but by using Siri, this can actually be a faster process than manually setting it. Alexa also uses NLP and as products like that gain in popularity, Natural Language Processing finds increasing applications in our lives.

Remember those 2,617 times you’re touching your phone everyday? If more companies fine-tune or build their apps to use NLP, we can start cutting that number down significantly. Like any unhealthy habit, a good first step is just to cut back smartphone addiction would be thru NLP technologies.

From a practical point of view, the fewer times you touch your phone, the fewer opportunities there are for you to transmit bacteria to it. One tap to activate Siri and you can dictate entire text messages or e-mails which also has the added benefit of not requiring you to crane your neck at unnatural angles (bye-bye neck pain!) or to strain your hand so badly that you develop Carpal Tunnel. Less time squinting at the screen to make sure you didn’t write “I’m ducking mad” equals less eye-strain.

If your phone was able to read out the name of a caller, you might see a decrease in your imagined phone vibrations. Generally, as you become increasingly used to using NLP, you will touch your phone less and, over time, this will help mitigate the effects of smartphone addiction, including the very real problem of depression.

Let’s Wrap It Up

However you look at it, 2,617 is a huge number and no matter what it is, if you’re doing something that compulsively, it’s going to have risks. When it comes to our smartphones, we’re seeing unintended and serious physical and mental health consequences. It’s scary and easy to think our only option is to take a hammer to our (very expensive) phones. The good news is that there’s a much more practical option and it simply involves using our voices.

Developers aren’t ignorant of the risks of smartphone addiction and at the start, they could largely turn a blind eye to it because they benefited from people using their devices so much. As we see these risks increasing and users becoming more aware of them, developers are waking up to the fact that what was once a benefit for them, is starting to be a liability.

Companies that want to survive and thrive in the cutthroat tech world need to address consumer concerns head-on. A strong commitment to making our technology work for us and benefit us is crucial and Natural Language Processing is a brilliant way to start down that path. From the first grunts between cavemen to the poetry of Hamlet, our voices have always been powerful tools. It’s time for the tech world to move forward by taking a small step back to help fight smartphone addiction.