Can you imagine building an alternative world just the way you envision it?

Well, to put it more accurately, we’re building it virtually. But it is another world, and it’s ours.

And this Second World is now a possibility because of two incredibly talented teams entering into a strategic partnership – Second World, as the company is named, and our very own Cubix joined hands to make our dreams come true.

Taking the queue from our CEO, Salman Lakhani; our culture at Cubix has always encouraged us to dream of creating new things or achieving what we imagine.

And, most of us hold onto this belief strongly; we can do anything once we set our imaginations alight.

Thanks to Second World, the catalyst we needed, our wildest thoughts were unleashed, as this phenomenal game company brought their idea over to us.

So, who are Second World (the company)?

Second World is a team comprising some of the brightest and tech-savvy individuals and group contributors to game development who harness NFTs, Blockchain Tech, Tokenomics, Smart Contracts, 3D strategies, and video game technology architecture blended together and aligned to leverage the "Play to Earn" model.

And the Unique Game Concept they brought over?

Second World is a 3D NFT video game based on city construction. The game leverages the polygon blockchain, and is categorized as an economy tycoon city-building game.

While there will be an MVP released this quarter (Q3 of 2022), it will only be operational on desktop platforms initially.

The game will be free-to-play, allowing players to build a city with various distinguished buildings that make the city prosper economically.

The game objective lies in establishing a city so players can earn profits and increase their value in the marketplace.

So how and why did this Collaboration between Second World and Cubix Materialize? 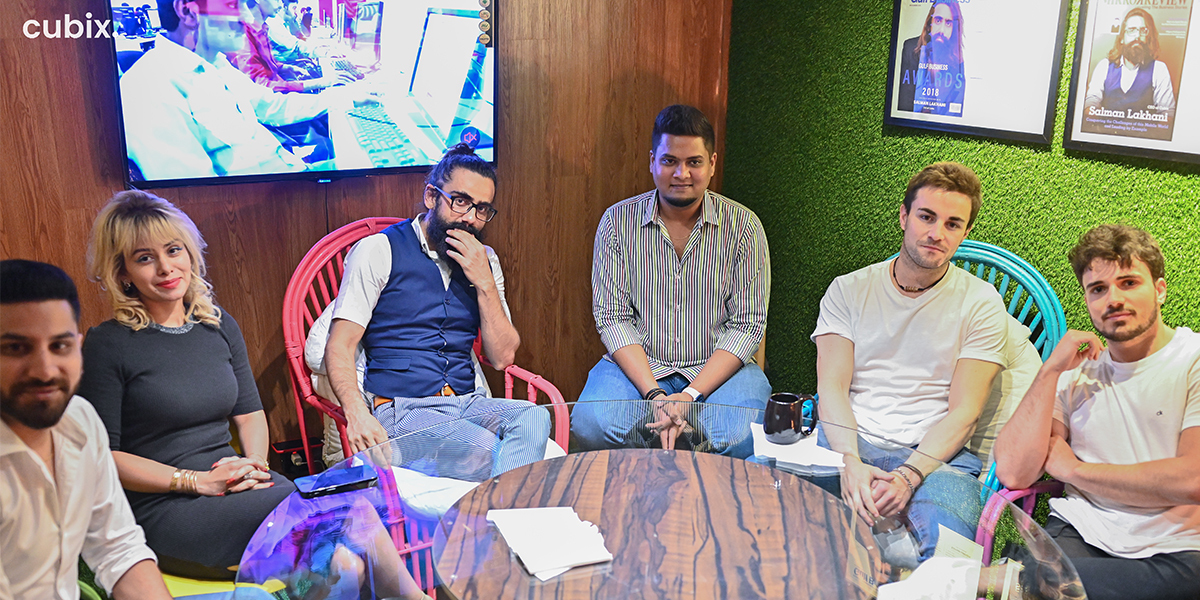 Second World desired seeking out the best fit for its project idea. The company needed a capable and seasoned set of professionals that they could entrust their project to.

Whoever they decided on, would need to have a significant history of producing market-leading games.

So keen were the investors for this project that they travelled from Spain to the port city of Karachi, in Pakistan, to meet their new partners. 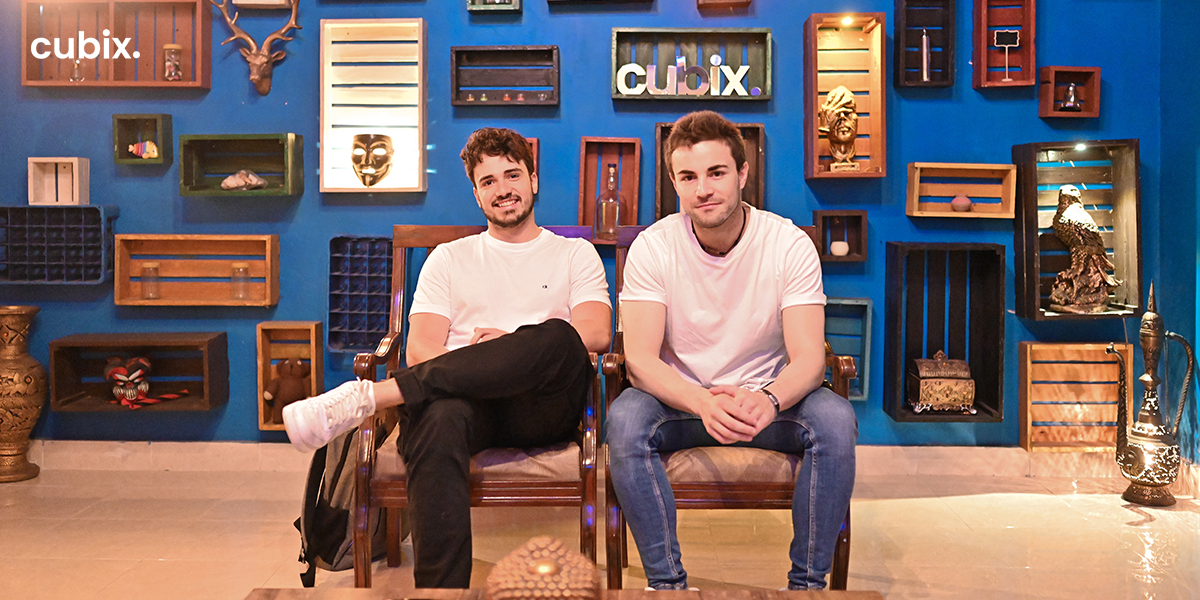 Cubix, a natural contender for collaborating with Second World, possesses excellent game development experience and thriving partnerships in the same industry i.e., the company is experienced in terms of building some of the best blockchain games, spanning cryptocurrency platform development, and NFT creation. 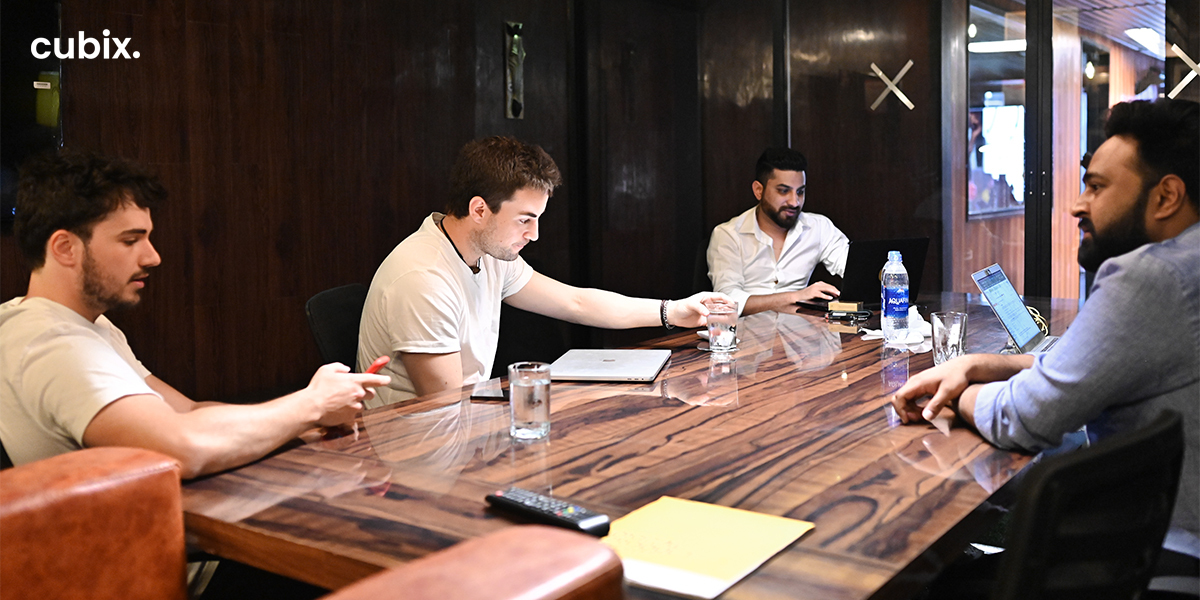 So, being selected for a partnership on this criterion is a matter of prestige, and although Cubix has been approached by many entities, Second World is indeed a significant name in the gaming industry.

Upon arrival in Pakistan, the Second World team was greeted and received with sheer delight and enthusiasm. It’s not often that clients fly out of their way to meet their partners located many miles away. The entire Cubix team feels honored, and while we value all our clients and partners, Second World has a special place in our hearts.

Our Process Ensures Your Success

So, once the news of this meaningful partnership settled in, our next round of excitement was the game idea.

Second World already had their concept in place, but we had to enjoy reviewing it and brainstorming it just as we do with other clients.

By the way, this is what we pride ourselves on, and that’s because we are really good at this. How so?

Well, our not-so-secret sauce is our process, which starts with doing our research and applying our skills when brainstorming an idea with the aim to identify the longevity and value of a project.

The reason why we emphasize on this part is our integrity and everything that is important to us, as a company, depends on this. Ultimately, our clients, too, rely on us to make the best decisions with their interest at the center of everything.

From the very first conversation, we knew that Second World would be a P2E game backed by Blockchain and NFT technology. Their idea entailed moving beyond the tangible world we live in and gain access to a world full of new possibilities. With virtual reality, a lot of things become possible.

Now while that’s quite a sweeping statement, whether you have fancied building the Taj Mahal or the Eiffel Tower, you can build your very own structures. In fact, you can create an entire virtual city. The only limitation is your imagination.

The game aims to encourage players to construct their own towns in such a way that they are both, economical and aesthetic. If done correctly, players will earn more because you gain points as you grow your metropolis and improve its revenue. This leads you to purchase better structures for your town, expanding its revenue and profits further.

And the more players build a city with elegant and unique buildings, the more they can level up their in-game city status. Also, the game environment is such that it encompasses the entire planet, Earth, which is divided into continents and countries. And so, you will be part of a wider plan to build what will be our Second World.

Your worth in the Second World is almost entirely dependent on what you do with the Tile you work on.

Players can independently initiate the development process at their purchased location. In addition, they will be engaged in the economic relations and other in-game interactions that would help them build their property according to economic demands.

Well, we’ve talked about a few things concerning the game, but there’s one main element that’s most important to mention. And that’s SWIO - the cryptocurrency that will be used in the second world. When you play the game, you will acquire this currency.

SWIO applies to both, places and structures that you can possess when you fulfill payment for them. These assets will also produce an SWIO return once you own them.

With your SWIO tokens, you can purchase and trade areas and structures on the online market.

You receive a token as a prize too for improving your construction. You may also purchase these tokens by credit card on the Second World platform via centralized and decentralized crypto exchanges.

Now, with a reasonable amount of information, you can get started with exploring the game as soon as it’s released. Stay tuned.

Zen Ameer is a veteran wordsmith and mentor who embraces digital advances. His passions are business, technology and cats.