2022 will witness tremendous growth in mobile apps and experience jaw-dropping mobile app startups that will automate yet another process. But launching a mobile app startup requires in-depth knowledge of how users will engage with their phones in 2022.

Our experts at Cubix build result-driven mobile apps. And to do so, we invest endless hours researching on user behavior and preferences, so every app we build can make it right to users’ hearts. The stats of 2020 are not only promised but have gotten us excited. This year, the intimacy between users and their mobile phones will heighten, giving us all the more reasons to dig into innovative apps.

It's no surprise that the mobile app sector is booming, with over 6.3 billion smartphone users worldwide. App usage and smartphone penetration continue to rise steadily, with no indications of decreasing in the near future. We have compiled the top 20 mobile stats for 2022 for you. Have a look!

The mobile app market is exploding, earning billions of dollars in revenue in the process. This is because users spend more than 90% of their mobile time utilizing various applications, so more user impact on the Mobile app usage statistics.

Nowadays, there is an app for everything from shopping, gaming, dating, and even banking. Looking at the number of mobile app downloads reached 218 billion by the end of last year. And thus, it comes as no surprise that app publishers are making extraordinary records in terms of revenue.

Apple App Store Statistics is a fascinating section to keep an eye on before producing an iOS app for your company in 2021 and 2022. When we check the App Store's statistics and numbers, we can see that there is no decrease at any point in the graph. The Apple App Store has witnessed a significant increase in app submissions, app downloads, app reviews, and current app availability since its inception in 2008.

For many years, the App Store has been causing a stir on the charts for a variety of reasons. Although Apple's iOS has a smaller market share than Google's Android, in several areas of concern, Apple is emerging as a more appealing option for consumers, app developers, and app owners.

To study the Apple App Store for this piece, we dredged up a large collection of app data and analytics. We were able to capture not just the store's current status but also the rising trends that will shape its future.

Hence, to reap all the benefits of your next project, consider the mentioned App Store Statistics for 2022.

The expected market revenue of mobile app will be produced over $935 billion in 2023, this will boast up the Mobile application market statistics in 2023. That's incredible. Have you ever wondered why people use (or don't use) mobile apps? Or what kind of mobile app they most like to use? Or how much time do they spend on the apps they download on their phones? We have included all of the up-to-date mobile app usage and download numbers, and estimates in one post so you can make sure your app is aligned with what your target audience is doing in 2022 and what is the impact on the Mobile application market statistics.

Android and iOS app revenue reached $133 billion revenue in 2021 a 19% year-on-year increase. IOS was responsible for 63% of total app revenue in 2021, according to the 19% increment per year the expected revenue of 2022 will be $158 that tremendously impact on the Average app growth rate. It emphasizes on the significance of creating incredible user experiences, and offering engaging user interfaces, giving users reasons to pay for the app! 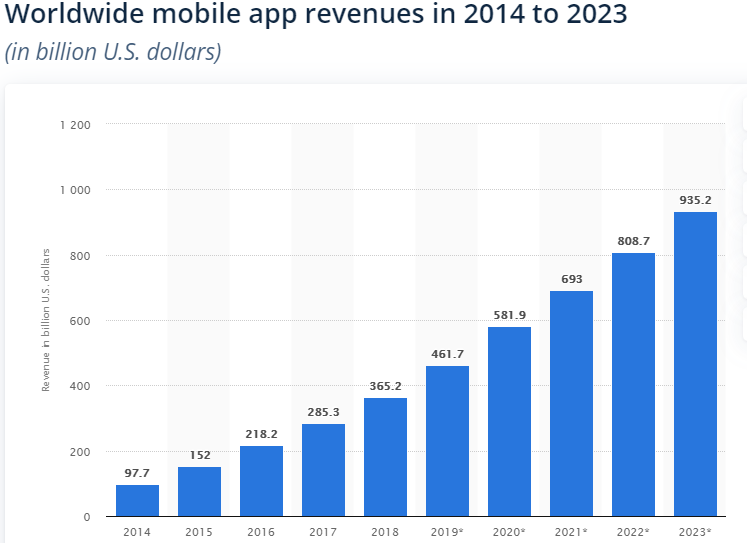 According to SensorTower, social media apps are leading the app game since 2019, with great impact on the mobile app usage statistics from WhatsApp and Messenger topping the charts, followed by TikTok. The top-performing apps have maintained their position since years, speaking volumes of user interest. Experts believe that social media apps will dominate the app category, and the average app growth rate will increase in 2022, with an inclination toward video editing apps.

If you are looking for a startup idea, explore social media platforms, and think of a breakthrough app that could hook users, as TikTok did. 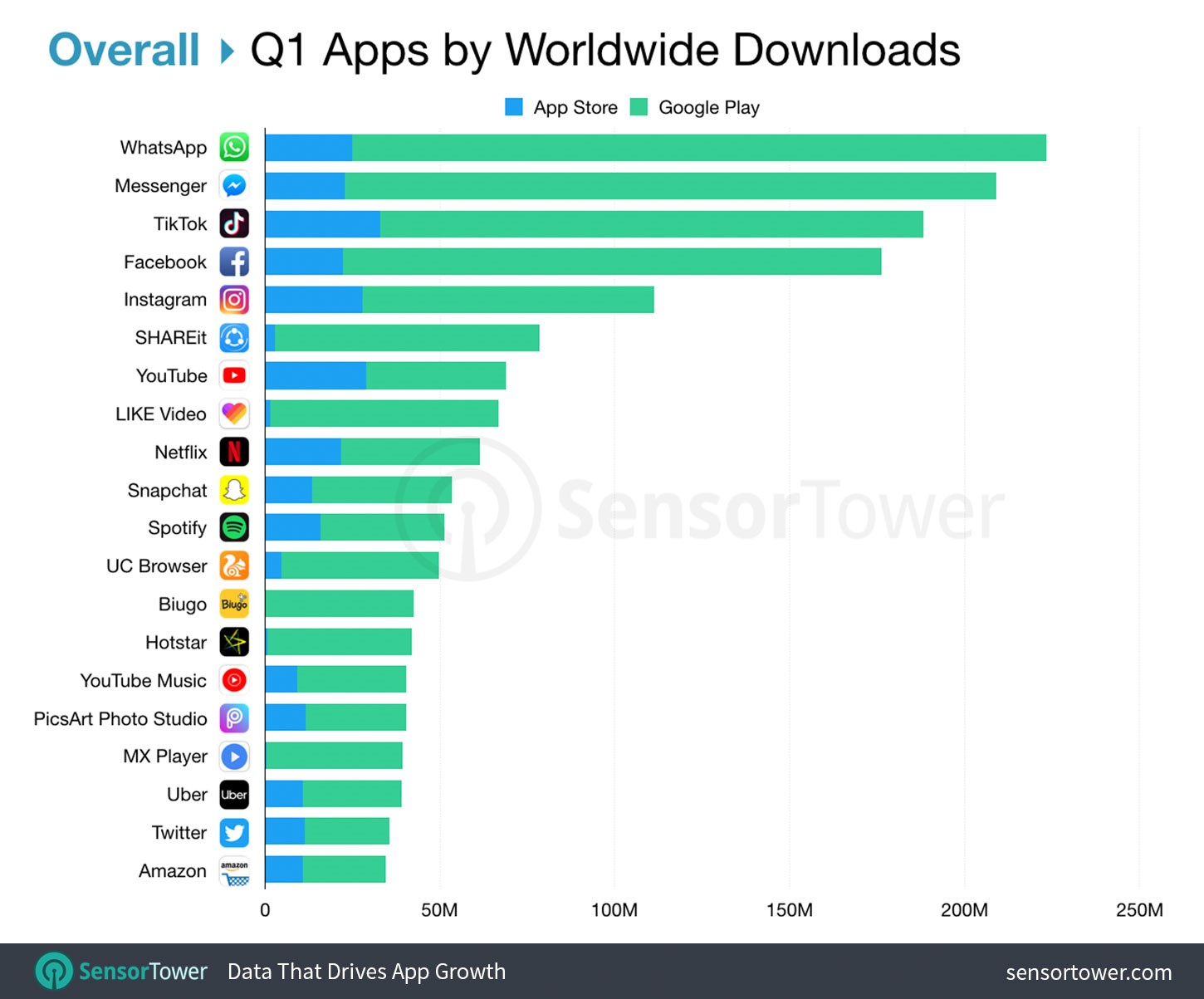 7. An average user spends 3 hours 10 minutes on the phone every day

The love between users and their mobile devices is getting stronger. A report by eMarketer shows that an average adult spends over 3 hours and 10 minutes of their day using their smartphones. The stats are promising. The more time users spend on their devices, the higher are your chances of connecting with them, pushing advertisements to the relevant audience, and exploring user behavior and mobile usage patterns. Also, it means that you get more time to interact with your target audience.

Statista reports that the global traffic from mobile phones will reach 40.77 exabytes per month, and by 2022, it will cross 77 exabytes per month. Global mobile traffic is growing at a compound rate of 46%. If you are still considering whether the investment in mobile apps is worthwhile, the answer is yes. 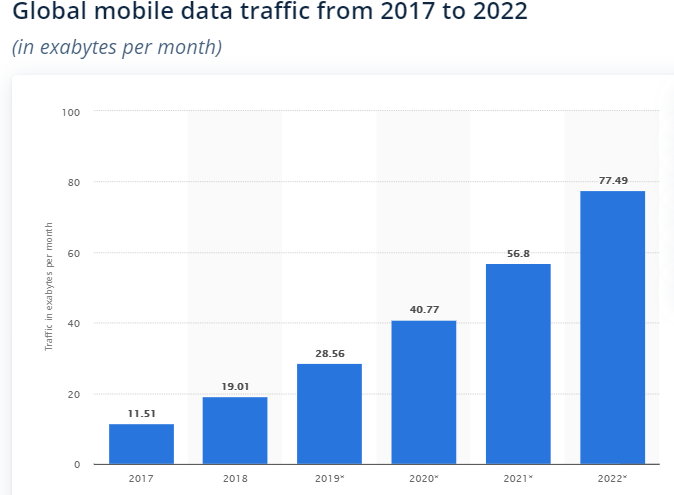 Half of the web traffic globally is from mobile phones. In Nigeria, mobile accounted for 73% of web traffic in 2019.

9. China has the higher number of smartphone users

The most populated country in the world, China, has the highest number of smartphone users. The country has over 1.3 billion mobile app users in both urban and rural areas. India has the second-largest mobile app user, with 1.17 billion users. However, India has a low smartphone penetration but is expected to increase. Next is the United States, with 327 million smartphone users. According to the World Atlas, 77% of Americans use smartphones. 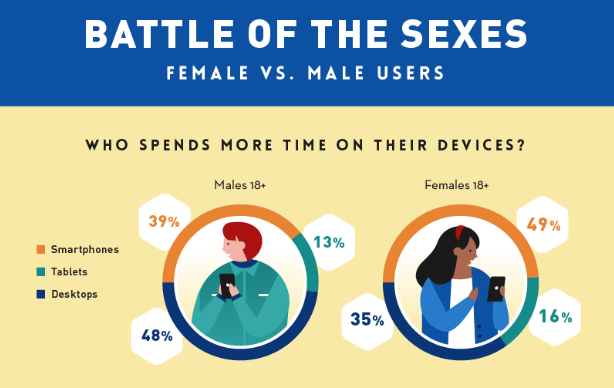 An average user has more than 80 app on the phone, but actively uses 9 apps every day and 30 apps every month. It shows that while people may download your app, chances of them using it regularly are fairly low. Your app must stand out in the crowd with its simple navigation, innovative features, incredible user experience, and more. 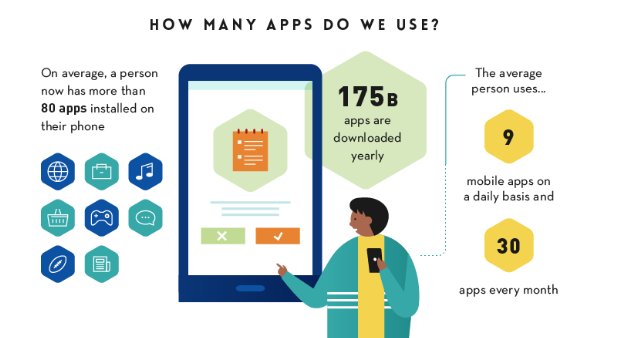 According to Statcounter, Android makes 71.1% of the mobile market share worldwide. IOS makes 27.57%, with a clear dominance by Android. In North America, iOS constitutes 54.14% of the market share, while Android gives a tough fight with a 45.54% share. In Asia, Android is a clear winner with an 81.39% share, while iOS stands at 17.79%.

Geographic variation in iOS and Android is clear. Carefully choose the platform, based on your target audience’s preferences of operating systems.

Android has a larger market share and more reach because of its great Mobile application growth statistics and larger audience. Businesses are justifiably more interested in developing apps for Android, if not for both platforms. However, the decision depends on the platform that your target audience uses.

The number of mobile apps in the app store usage statistics will tremendously rise in 2022, as organizations are tapping on mobile app platforms. 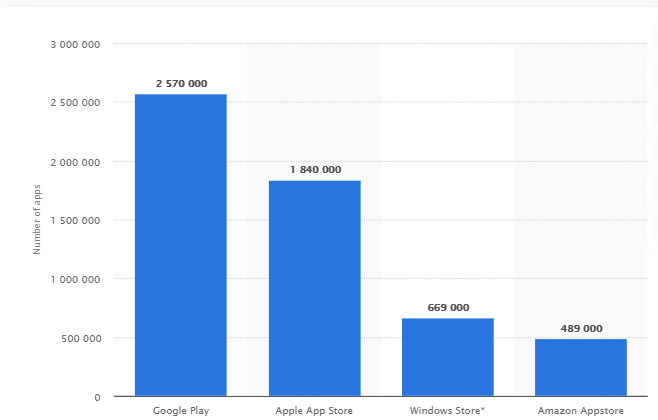 14. People spend more time on mobiles than on TV

There was a time when television was the most significant source of entertainment. Today, mobile phones have taken over, with consumers spending over 190 minutes on the phone while only 168 minutes on the television. Mobile apps are the center of all user-related activities, so shift your focus towards if you haven’t already.

15. Mobile games are the most downloaded apps

Mobile games are the most downloaded apps on the Google Play Store and App Store, and the average lifespan of a mobile game is depend on the upgradation and user’s interest, so more downloader identifies popularity of your game. Google Play Store witnessed 29.4 billion game downloads, while the App Store had 8.9 billion game downloads in 2018. Users are inclined towards mobile app games, after the video games, the average lifespan of a mobile game has been increased that video games can give valuable insights for startups looking for download-worthy app ideas.

16. 42% users switch to competitors after a bad mobile experience

Creating a memorable user experience is integral to engage and retain users. Slower apps with bugs, app crashes, weak optimization, and other issues lead to frustration, all of these flaws hit the mobile app download statistics. Over 42% of people with a bad experience on mobile devices will shift to competitors. You need a full-functional and well-designed mobile app to engage with your audience.

Advertisements can be annoying, especially when one cannot skip them. According to a survey by Facebook, 94% of people have their phones in their hands while watching TV, and 55.5% use their phones while an ad is playing on the TV. 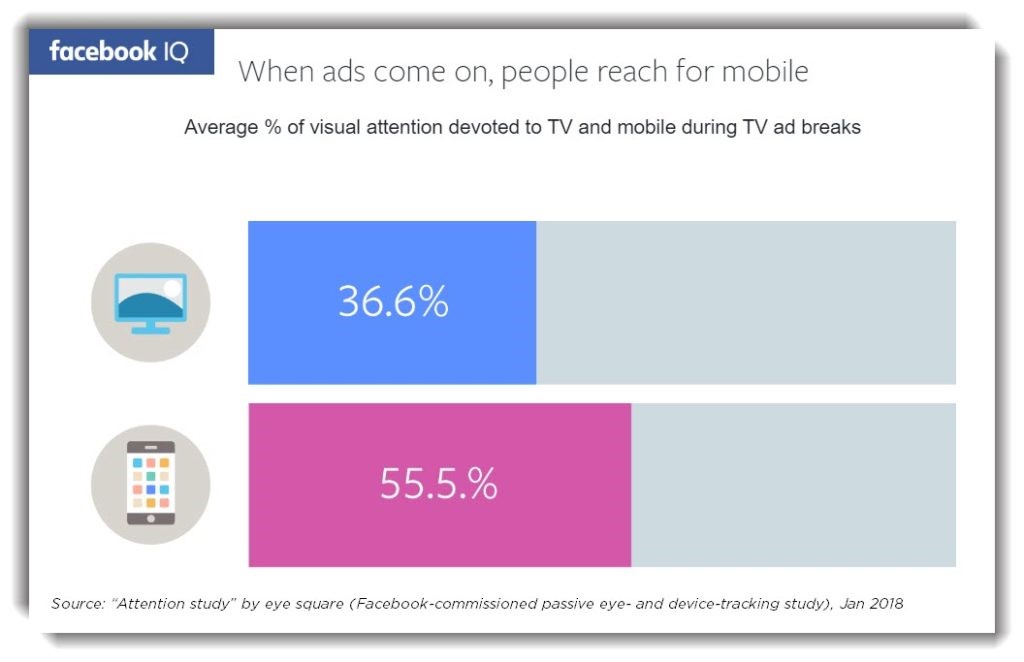 18. 70% users their phone before making a purchase in a retail store

While retail stores are still a favorite for shopping, over 70% of users use their mobile phones to look for product information, price comparison, and more, before purchasing from a retail store.

A survey by Litmus shows that 46% of all emails are opened on the phone, as people carry their smartphones everywhere, while users have limited interaction with desktops. Also, emails that do not correctly open on mobile phones are deleted within three seconds.

20. The most downloaded mobile game – clash of clans

Mobile app development statistics of a few mobile games are popular among the apps and the smartphone users and are the most downloaded category of apps. Among popular games, Clash of Clans takes the lead as the most downloaded game, followed by Candy Crush Saga, Monster Strike, Puzzles & Dragons, and Honor of Kings.

If you are looking for a mobile game category, know where user interests lie. 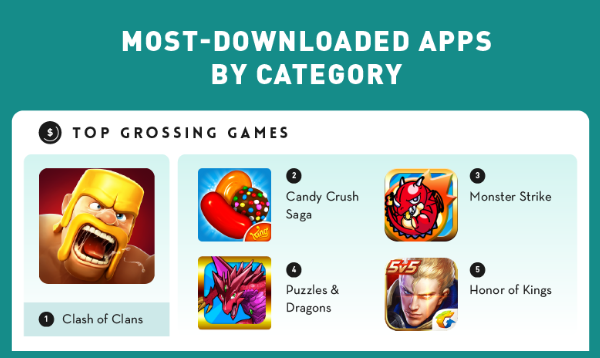 Smartphones are more than entertainment tools and have become an integral part of our lives. In 2020, 70% of B2B search queries will be made on the phone, growing from 50% in 2019. The potential of mobile phones to overshadow other digital devices is loud and clear.

On average, 2022, approximately 81 thousand mobile apps were released through the Google Play Store, highlighting the ever-growing mobile app industry and frequently increase in the mobile app download statistics. Play Store has relatively fewer apps launched every day. On average, more than 1400 new apps are launched on the iOS store.

Facebook reported that over 92% of its advertising revenue comes from mobile, and increased from 88%. According to a statement by Facebook, more than 2 billion people one of Facebook every day. Facebook also showed its commitment to improving private messaging and stories.

24. Only quality apps are making it to the app stores

With more mobile apps launching every day than ever, App store usage statistics is increasing day by day, with more vigilant to ensure only the highest-quality apps make it to the users and enhance the mobile app development statistics. Google banned more than 100,000 bad developers from launching their apps. It means that you need a top-notch mobile app that meets the standards of app stores to launch. And for that, you need a veteran app development partner that knows the mobile world inside out.

The information can be overwhelming. These stats shed light on changing user behavior, spending on digital platforms, and more. IOS and Android release updates every now and then, and aligning your development plans accordingly can be challenging.

Let’s simplify it for you. Our mobile app experts are eager to build an extraordinary mobile app for you. Discuss your Mobile application growth statistics, and we will take it from there!