The unexpected romance between Uber and Careem has been the talk of the town since last week when Uber acquired Careem for $3.1 billion; the largest-ever transaction in the tech industry for the Middle East. Careem will operate as an independent company and as a wholly-owned subsidiary of Uber. Careem will receive $1.4 billion in cash and the remaining $1.7 billion in notes convertible to Uber shares.

Congratulations to every @Careem Captain, Customer and Colleague on this special moment. We've been blessed to impact the lives of millions in the region and it’s only the start as we join forces with @Uber.

The decision to let Careem operate as an independent company is a very smart one. The framework has tremendous advantages, as Uber can experiment with new products and services while distributing the risks across two brands. If an idea isn’t as successful as expected, the damaged will be limited to one brand only. Also, the parent company can create specific brand identities for each entity, leveraging from the already established credibility.

His Highness, Sheikh Mohammed, tweeted on the incredible deal, taking pride in the companies of the Desert which were acquired by global giants for billion dollars.

In 1999, many people questioned our idea to establish Dubai Internet City in the desert. Two years ago, Amazon acquired the multi-billion dirham https://t.co/8r1e7dmLtG and today, Uber acquired Careem for Dh11 billion. These giant companies flourished from the "desert" of Dubai. pic.twitter.com/h9gkOXK8n9 — HH Sheikh Mohammed (@HHShkMohd) March 26, 2019

The Dubai-based transportation company was founded by Mudassir Sheikha and Magnus Olsson in July 2012. Careem acquired a Saudi-based home delivery company, Enwani, and expanded to Palestine in 2017 and in Baghdad in 2018. Careem has operations in UAE, Qatar, KSA, Bahrain, Lebanon, Pakistan, Kuwait, Egypt, Morocco, Jordan, Turkey, Palestine, Iraq, and Sudan.

The company started with a mission of simplifying and improving the lives of people. The company created over one million employment opportunities, catering more than 30 million users in 120 cities. The company has successfully raised millions of funding over the period.

The History of Successful Acquisitions and Mergers 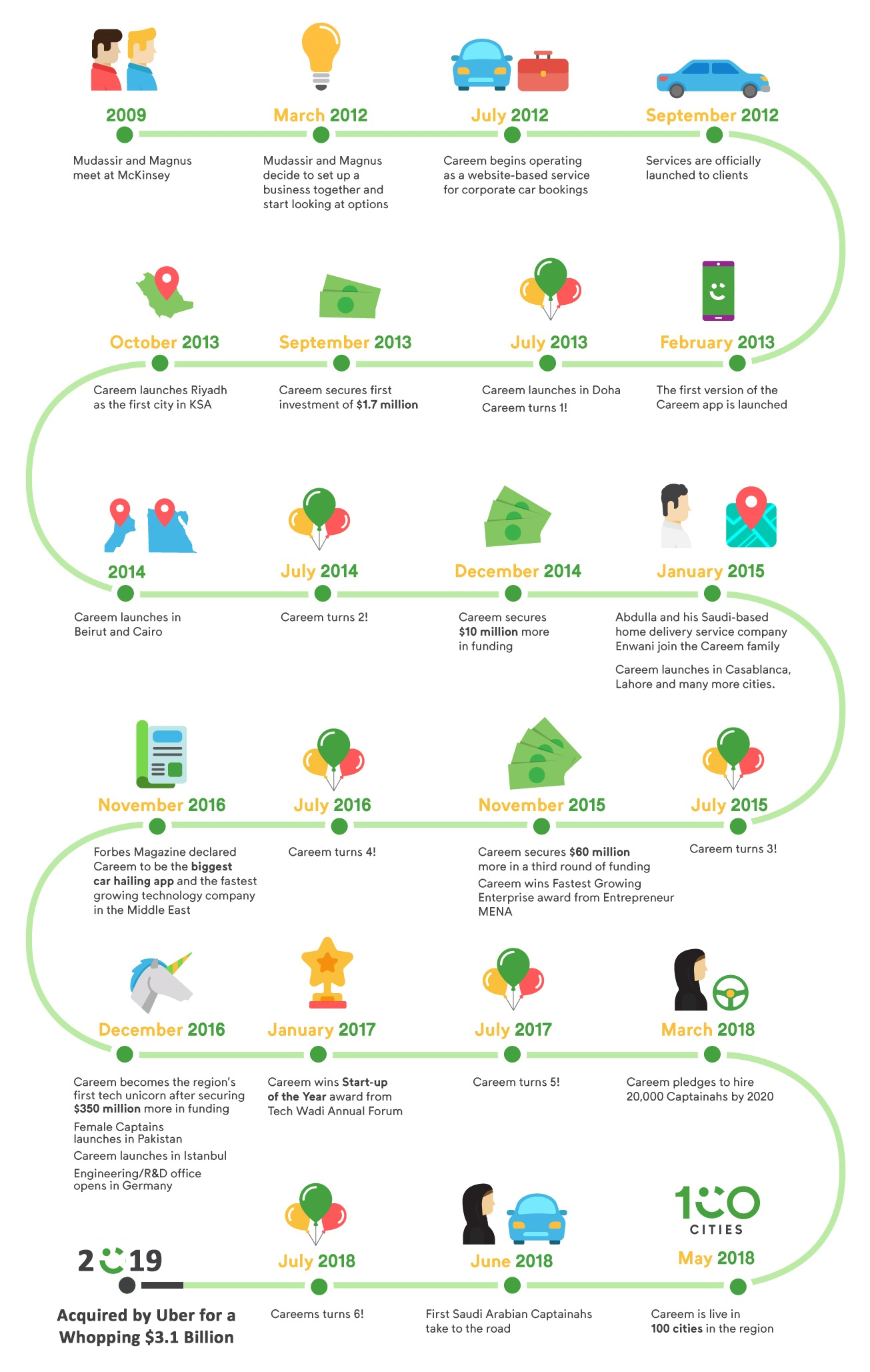 This brings us to the fact that tech startups like Careem have massive potential. The company started small and expanded bit by bit. Its extensive regional expertise makes it an eye-candy for giants like Uber.

What Do We Have In Store?

At Cubix, we have developed diverse web and mobile apps for startups and entrepreneurs with a budding future. Our food app, Chachi, finds available homemade food in the vicinity, connecting chefs and foodies. It’s an excellent opportunity to empower chefs and cooking enthusiasts.

Our jaw-dropping social media app, Glimmer, is an app designed for people who are disabled and are willing to grow their social circle. The app is a complete social networking platform. It lets you create a profile to join the amazing community of people with disabilities.

PeeSpots is a location-based app that finds accessible restrooms in the area, helping people relax whenever they need to. It’s a relatively unusual concept that is yet to become popular.

We are certain that these startups have the potential to create wonders in the long run. Why? For they are dreams we have transformed into realities.

Have a startup idea but having second thoughts? Let’s discuss it!

Salman Lakhani is the Founder & CEO of Cubix, Inc. He has over 18 years of experience in software development, creative and strategic operations.