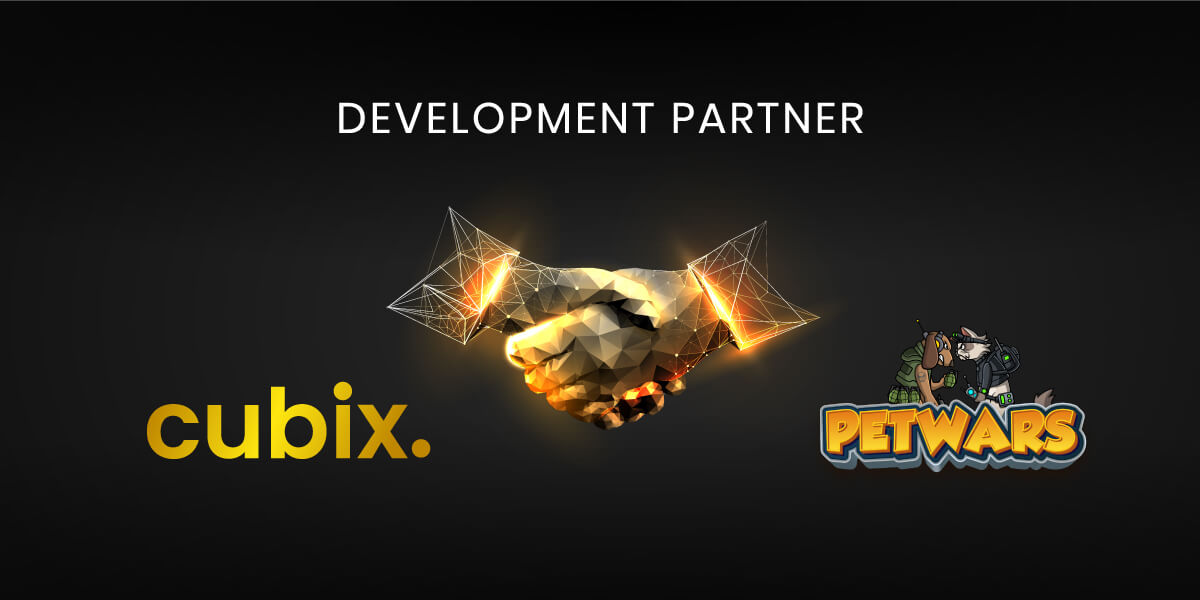 If you have ever kept pets, you'd know how loyal and possessive they can be. Sometimes, their affection for you can be quite competitive when you have more than one pet around.

At times, their bickering can be quite cute, with a few snarls and scratches. Other times, blood and fur might fly, but that is part of the game. Pun intended.

The new NFT game PetWars that Cubix will build is based on this very nature of pets, although possibly exaggerated in some sense. Nevertheless, the game is reflective of the nature of animals and their possessive behavior toward their owners. Hence the name, PetWars.

The game to be built under a partnership between Cubix and PatWars will be an online turn-based trading card game for the iOS and Android.

PetWars had set out to find a software and game development partner that would be aligned with their endeavors to build a Play to Earn (P2E) game. Cubix matched the requirements based on experience and recent success with building NFT games for some renowned brands.

PetWars Opted for a Software Expert with a Track Record

Being a renowned software development company with expertise in game development, Cubix was their top choice. Moreover, having built several blockchain development solutions in the past year, Cubix has turned its attention to NFT game development; recent examples of the classy games Cubix has built include MicroPets, MiniPets, Wagmi Games, Taunt Battleworld, and Track9.

As the name implies, PetWars is about just that.

The game centers around a phenomenon wherein cats and dogs compete for their owners' love. However, there can only be one victor.

In a winner-takes-it-all battleground, users enlist dozens of crazy, colorful pets comprising cats, dogs, birds, insects, and much more in their battle for the top spot.

Players can take part in the game and command an army of pets in this online digital trading card game.

The major component of the PetWars game is the Battleground, and that's where all the action happens. But there are other components too that make this game exciting.

Battleground: This is the playing field where all cards are played. A maximum of 10 cards can be played by either player onto the battlefield at any time. The players' icons are displayed here, with how much life and coins they have. Also, the cards in the players' hands and how many cards are remaining in their deck.

Graveyard: Cards that have been played, or destroyed, will go to the graveyard.

Coins: The game will revolve around playing cards on each turn to protect the player's life and to attack the opponent. Every card has a cost ranging from 1-9. At the start of the game, the player starts with 1 coin. On subsequent turns, the player receives an additional coin. Some cards will allow the player to temporarily gain more coins than they currently could own. In some circumstances, this could lift the player's coin limit above the usual maximum of 9.

The Cards: Player's Hand: The player will start any match with 3 cards, with the player going second drawing an additional card. There is no limit to how many cards a player can have at any one time.

Creatures: The core of the deck is creatures (pets) that are used to attack the opponent and defend the player. These can be vanilla creatures that have a basic attack and life, while others will have special abilities which make them more useful in specific situations.

Debuffs: Cards that affect the opponent or the creatures they control. For example, to stun the opponents' creatures for a turn so they cannot attack the player.

Game development is in its infancy, but there is a lot that will be released in the coming months, such as:

PetWars is releasing an NFT collection in anticipation of the game release. This will allow investors to show their support by purchasing unique limited-edition artwork.

Those holding PetWars NFTs will receive exclusive benefits to reward investors' loyalty. The team wants to make the NFT collection affordable and accessible to every single investor.

The minting cost of each NFT is only 0.5 BNB.

Clearly, PetWars offers users an exciting game that is much more than that. It is an incredible opportunity to earn as you enjoy a riveting game with a fresh and delightful concept. There'll be a lot of us waiting in keen anticipation for PetWars to launch, but all good things take time.